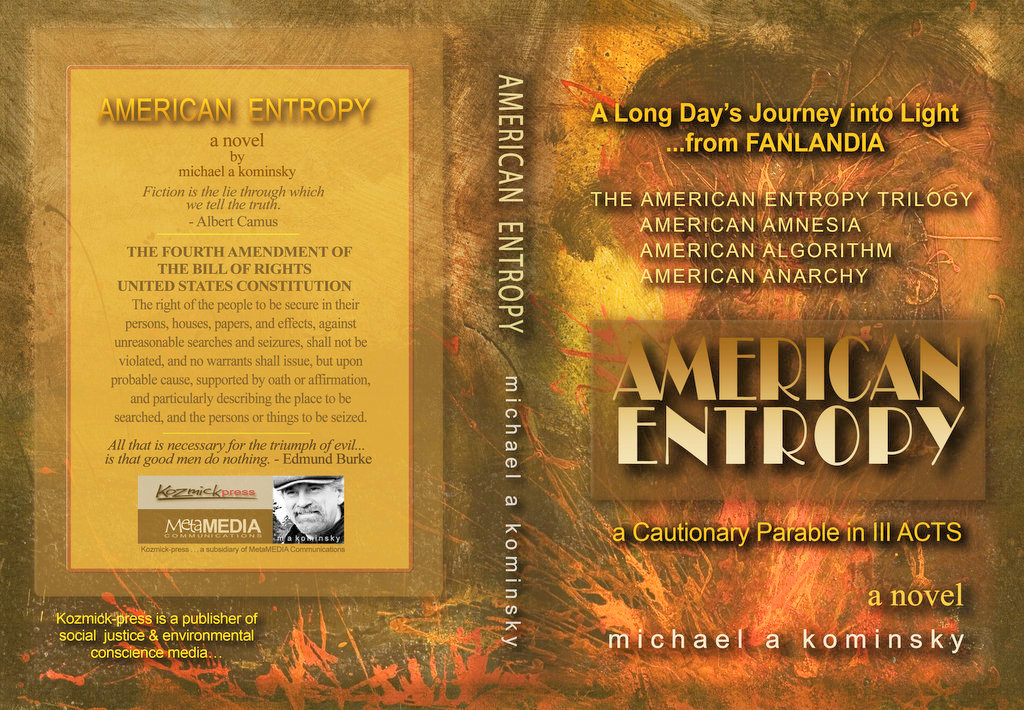 A Cautionary Parable in III ACTS
(Available on Amazon.com in Kindle eBook and Trade Paperback in December 2021)

The AMERICAN ENTROPY TRILOGY, is a series of three sequential novels:
AMERICAN AMNESIA         Book 1: 1900 – 2000
AMERICAN ALGORITHM   Book 2:  2000 – 2004
AMERICAN ANARCHY        Book 3:  2008 – 2024 Spring of 2022
Admittedly a literary primal scream, it is my hope that in  some small way I may have contributed to an awareness and better understanding of the tremendous positive potential of the internet for promoting socially beneficent innovation, and empowering and promulgating democratic ideals.
But, that it must not go unsaid, it’s well past time to break the glass, sounding a shrill siren, warning  of the long-term pathological consequences of:

In AMERICAN ENTROPY, the term Entropy is used in the context of a measure of the disorder or randomness in a closed system, in particular the gradual, not necessarily inevitable, steady deterioration of a system or society to collapse.

The TRILOGY, through fictional depiction, attempts to remind and reinforce the lessons of history, replete with inspirational, courageous acts of heroism, oftentimes against great adversity including extraordinary personal sacrifice and physical harm, to advance the cause of freedom, justice and equality.

While as a novel it strives to entertain, it’s primary raison d’ etre, frankly is to inform. It is inspired by the eternal literary verity:

Fiction is the lie through which we tell the truth.
– Albert Camus

So in someways, this is my Russian Novel—a dark, Slavic melancholy morality play, panoramic in scope with lots of characters over an ambitious time line. My contemporary take on Leo Tolstoy’s epic novel “War and Peace”…as may have been told by Mel Brooks.

“The only thing necessary for the triumph of evil
is for good men to do nothing.”
– Edmund Burke
Wednesday, November 9, 2016  1:15 AM
“I’m mad as hell…and I’m not going to take it anymore!” shouts Howard Beale erupting during the middle of his newscast in a beige rain coat, his wet, gray hair plastered to his forehead.
Because I was so disgusted by the flagrant demagoguery, the outright mendacity and obfuscation during the rancorous national election campaign I was desperately seeking some touchstone of reality, some validation of the legitimacy of my anger, indeed rage, that I was not just being consumed by some hormonal mid-life meltdown.
So, I was about half way through the timeless political parable for about the 10th time, the 1976 film Network brilliantly written by Paddy Chayefsky, when I paused my DVR to check on the lopsided margin of victory Hilary Clinton (D) held over Donald Trump, the (R)epugnant nominee for president of the United States.
In the film, Beale, the anchorman for the UBS Evening News, struggles to accept the inequities of the world he reports. It concludes with the murder of Beale on national television; a voice over darkly proclaims him “the first known instance of a man who was killed because he had lousy ratings”. It is the beginning of his transfiguration into a mythical cult hero, now an enduring totem crying out against social injustice. A film classic—both a commercial and critical success winning four Oscars. Good stuff and my go-to balm when I begin to doubt my grasp on political reality.
I had just finished viewing this eerily prescient scene, now more relevant than ever, which perfectly captures and distills the algorithm if you will, of the theology of neo-liberal corporate hegemony.  Arthur Jensen, President of UBS is reciting the Sacred Scripture of the Holy Corporate Gospel to Howard Beale, giving him his marching orders:
JENSEN
You have meddled with the primal forces of nature, Mr. Beale, and I won’t have it, is that clear?! You think you have merely stopped a business deal…that is not the case!
The Arabs have taken billions of dollars out of this country, and now they must put it back. It is ebb and flow, tidal gravity, it is ecological balance! You are an old man who thinks in terms of nations and peoples. There are no nations! There are no peoples! There are no Russians. There are no Arabs! There are no third worlds! There is no West!
There is only one holistic system of systems, one vast and immane, interwoven, interacting, multi-variate, multi-national dominion of dollars! Petro-dollars, electro-dollars, multi-dollars!, Reichmarks, rubles, rin, pounds and shekels! It is the international system of currency that determines the totality of life on this planet! That is the natural order of things today! That is the atomic, subatomic and galactic structure of things today!
And you have meddled with the primal forces of nature, and you will atone! Am I getting through to you, Mr. Beale?…
(pause)
You get up on your little twenty-one inch screen, and howl about America and democracy. There is no America. There is no democracy. There is only IBM and ITT and AT and T and Dupont, Dow, Union Carbide and Exxon. Those are the nations of the world today. What do you think the Russians talk about in their councils of state Karl Marx? They pull out their linear programming charts, statistical decision theories and miniMax solutions and compute the price-cost probabilities of their transactions and investments just like we do.
We no longer live in a world of nations and ideologies, Mr. Beale. The world is a college of corporations, inexorably determined by the immutable by-laws of business. The world is a business, Mr. Beale! It has been since man crawled out of the slime, and our children, Mr. Beale, will live to see that perfect world in which there is no war and famine, oppression and brutality.
One vast and ecumenical holding company, for whom all men will work to serve a common profit, in which all men will hold a share of stock, all necessities provided, all anxieties tranquilized, all boredom amused. And I have chosen you to preach this evangel, Mr. Beale.
HOWARD
(humble whisper)
Why me?
JENSEN
Because you’re on television, dummy. Sixty million people watch you every night of the week, Monday through Friday.
So, I tuned to the election coverage on lefty MSNBC to check on the overwhelming, indeed humiliating Electoral College margin of victory Hilary Clinton, America’s historic first female president, held over Donald Trump—Putin’s Poodle, the Buffoon with the Bottle Blonde Bouffant.
At last, the demonstrable triumph of truth over demagogic trope! Hu-rray and Halleluiah!
Hillary Clinton (D): 227
Donald Trump (R): 304
Donald Trump is projected to be the
45th President of the United States!
W-T-F! That’s right…What The Fuck!