All that is necessary for the triumph of evil is that good men do nothing.
– Edmund Burke

I have no illusions that my meager literary talents even belong with the literary giants listed in the Preface.

I have attempted to deliver my humble oeuvre at weaving an entertaining, hopefully leaven with some humor, allegory. Even though it is, perhaps an overly ambitious epic time frame, I wanted to give the reader a broad historical perspective from the Great Depression, and through literary sequels, to the Great Recession…through a wide angle lens.

Those who cannot remember the past are condemned to repeat it.
– George Santayana

It is important to remember that even though this is a work of fiction, and strives to entertain, it’s primary intent, frankly is to inform. The overarching purpose of it is to leave the reader with a macrocosmic understanding of the fundamental issues surrounding anthropogenic climate change including a vision for radical reformation of the irreparably broken political system that precipitated it.

As such, it should be viewed more as a philosophical dialectic, rather than on its dubious technical merits. Even though I have tried not to overburden the reader with gratuitous technical jargon/nomenclature including acronyms, unfortunately the inherent complexity necessitates the use of much technical terminology.
While I have attempted to mitigate technical errors through conscientious research, because I am not from academia, nor do I not represent myself as any kind of an expert on climate science, nor am I an economist or political scientist or any kind of expert on the Internet and cyberspace, I hope the reader can transcend any technical insufficiencies. The technical elements presented in many cases are a distillation/simplification for dramatic purposes. As such I take full responsibility for any technical inaccuracies, omissions or deficiencies.

With unabashed passion, I have endeavored to proffer the scientific, legal and pragmatic portent of the lethal consequences of the coming 6th Massive Extinction of life form on the planet from climate change…unless…and that’s where you come in.
The most problematic and difficult, yet imperative component of all–the politics of a massive shift in the collective consciousness of humanity…simply stated…from the Me to WE.

To survive this unprecedented global threat to our very existence will require a radical reordering of civilization’s deeply devolved and perverse priorities:

In the process I hope that you find this parable an entertaining read. Despite the gravity of the topic, I have tried to at times introduce a playful and whimsical take on this ‘collective global suicide’; sorta redefines oxymoronic.

Sadly, the highly developed, virulent strain of Capitalism particularly prevalent in America over the past century has evolved into a Sociopathology. Through Globalism it has now metastasized all over the world, indeed tout le monde, with the disparity of wealth rivaling even the excesses of the mythical ostensibly unregulated Gilded Age of the late nineteenth century.

We can have democracy in this country or we can have great wealth concentrated in the hands of the few. But we can’t have both.
– Louis Brandeis – Associate Justice on the Supreme Court of the United States from 1916 to 1939.

The notion that the solution to climate change is through more Capitalism is a naive myth promulgated through the slick dissembling of the euphemism ‘marketing’ by corporate mainstream media—the sycophantic handmaidens of the Corporacy. Even the well-meaning mainstream environmentalist have failed to grasp that the current mutation of Capitalism is incapable of self-reform—it is the problem…not the solution.

Modern-day Capitalism’s sole mandate is the creation, accumulation and retention of wealth, a positive feedback loop of self-interest and self-reinforcement based on the exploitation of the productivity of the working class. It is this exchange of excessive unequal values that creates surplus, exorbitant profit, predominately percolating up to the obscenely asset rich plutocracy: Neo-Feudalism.

Since 1978, adjusted for inflation, workers wages have essentially remained stagnant while worker productivity has almost doubled, with most of the the exponentially growing surplus accruing to the Corporacy, and eventually the richest one percent.
Through the systematic attack and successful de-certification of collective bargaining units by the Corpocracy along with the tacit ever-present threat of cheap unregulated labor of Globalism, workers have been coerced into a perpetual state of fear and anxiety—petrified to take action, for fear of short-term tangible loss in exchange for some conjectural long-term gain in the abstract.

The great tragedy is that the American working class for the most part is ignorant of the fact that they are essentially slaves to a rigged system where our democracy, or what’s left of it, like a defective gene run amok through incest, has mutated into the obsequious, antithetical servant of Capitalism.

I freed thousands of slaves, but I could have freed thousands more…if only they had known they were slaves.
-Harriet Tubman – African-American abolitionist, humanitarian

My exhortation is particularly directed at the exploited working class, the dispossessed working poor, college graduates laden with heavy student loans many of whom are unemployed/under employed, journalists, artists, poets, writers, the clergy and teachers…anyone who gets it…irrespective of age, political or religious stripe…and is willing to engage; to take it to the streets. For as history has tragically repeatedly demonstrated time and again, meaningful social change can only come from the bottom up.

History does not repeat itself, but it does rhyme.
– Mark Twain

You will form the nucleus for leadership of the movement to deal with the most daunting human existential crisis in the history of the planet–to rise up to resist the hegemonic corporate forces that are causing the essentially irreversible devastation of the ecosystem through unbridled release of carbon dioxide into the atmosphere.
Starting with you, then through geometric progression like a benign virus, multiplying exponentially until the tipping point of critical mass is reached. It will not be easy…the oligarchs will not go quietly into the night:

The most important dilemma facing us is not ideological. It is logistical. The security and surveillance state has made its highest priority the breaking of any infrastructure that might spark widespread revolt.

The state knows the tinder is there.

It knows that the continued unraveling of the economy and the effects of climate change make popular unrest inevitable. It knows that as underemployment and unemployment doom at least a quarter of the U.S. population, perhaps more, to perpetual poverty, and as unemployment benefits are scaled back, as schools close, as the middle class withers away, as pension funds are looted by hedge fund thieves, and as the government continues to let the fossil fuel industry ravage the planet, the future will increasingly be one of open conflict. This battle against the corporate state, right now, is primarily about infrastructure.

We need an infrastructure to build revolt. The corporate state is determined to deny us one…

– Chris Hedges – author and essayist; excerpted from:
The Myth of Human Progress and the Collapse of Complex Societies
January 26, 2014 – Truthdig.com.

Be ashamed to die until you have scored some victory for humanity.
-Horace Mann 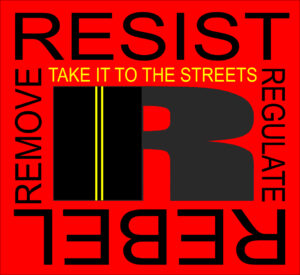 The four primary elements, or The 4Rs for the Great Re-Awakening…the Neo-Renaissance of Humanity:

REMOVE! -The Big Money paid by Corporations/PACs from elections and the politicians who accept it

REGULATE! -The financial and banking mega-complex and protect the planet

REBEL! -Take it to the Streets! See you there!

Kozmick Press, a subsidiary of MetaMEDIA Communications, is a publisher of social justice and environmental conscience media.